"It really was a super positive experience despite being longer and tougher than we both expected."

So sorry we haven’t been in touch until now. I’ve been meaning to email you! We had a beautiful baby girl called Nora Lucia Wallace at 11.25am on Sunday 25th August. 3.59kg, 51cm long and very healthy 🙂 Can’t believe she’ll be 6 weeks tomorrow!! 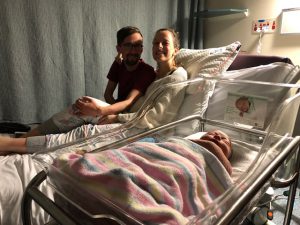 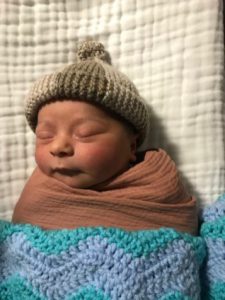 I had a drug free birth at RPA. My hind waters broke at home at 4.20am on the 24th and we went into the hospital at about 10am to get the IV antibiotics as I was GBS positive and we had decided to take the antibiotics (after much research in the weeks prior). We knew we wanted to labour at home so after the first IV dose we were sent home with oral antibiotics to take every 6 hrs. I had lunch at home and then had a nap in the arvo. The surges slowly started at about 3.30pm and just intensified gradually throughout the evening. I really enjoyed early labour as it was a beautiful evening and we had candles on and music and Luke was being so incredible. I even ate a small bowl of minestrone soup that Luke had cooked and was feeling pretty confident and excited! 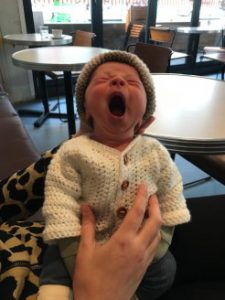 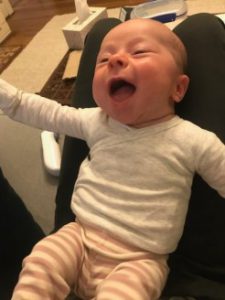 Our doula, Nadine Fragosa, was the best decision we made for our birth! She was messaging Luke throughout early labour and he was sending her screenshots of the contraction timer app. She came to our house at about 11pm when I think I was in active labour. This was just after my waters broke again very dramatically in the bathroom when I had just put on my nice Lulu Lemon trackies that I had planned to wear to the hospital lol. I was more concerned about my trackies than anything else and made Luke dry them with a hair dryer which was pretty funny in hindsight. I got a bit freaked after that as things intensified a lot more so that’s when we called Nadine. I stayed at home labouring for a few more hours and Nadine helped me to do the hypno breathing a bit better as I was letting some of the bigger contractions get a little overwhelming. I wanted to be upright throughout all the contractions so I was mostly leaning on a wall in my hallway with Nadine sitting on the floor helping me to breathe through them and giving me encouragement. We continued at home until about 1am then I decided I wanted to head to hospital because it was pretty full on.

We began in the birth centre for a few hours with just Doppler monitoring of Nora and regular checks of my blood pressure. I did three massive vomits throughout this time (including all the minestrone soup haha) – the pain was more intense than I had imagined! I laboured in the shower a lot as well as leaning on walls and hanging off random coat hooks haha. The midwife kept checking the colour of my waters on a pad and a couple of hours after we arrived she found a tiny bit of meconium in my waters. They told us that they could monitor Nora better in the labour ward with continuous monitoring through the bands around my tummy and recommended that we move there. Even though no one seemed overly worried and Nadine said it was the tiiiiniest amount of meconium, we decided to move to the labour ward as we didn’t want to risk anything with the baby. They made the new room dark and a similar atmosphere to the birth centre room so it didn’t bother me. Only difference I think was that I couldn’t give birth in the bath but there was still a bath I could use to labour in.

I dilated slowly but fairly consistently. I asked not to get vagina examinations in my preferences but in the end I was curious so I had a few. Labour was verryyyy painful as she moved into posterior as she was moving down but came back around eventually. Just crazy painful back/bum labour! The breathing tequniques really helped especially through the surges and Luke was soooo amazing as a support person. He felt like he knew what to do and how to help which was really beautiful for me. Nadine was incredible and I think I would have given up without her. She kept me going when I was exhausted and was such an amazing support. I stopped believing I could do it towards the end and she convinced me that I could. I also started saying that I thought I needed drugs (even though in my birth preferences I said I didn’t) but Luke and Nadine were great and were able to keep me going without them. I was offered the gas but didn’t want it because I was so nauseous and and I didn’t think I could keep breathing the way I was with the mask thing. Nadine inquired about sterile water injections as she could see me starting to give up as the back/bum pain and pressure was soooo intense. The midwife organised a few more midwives to come and give the injections (two on each side of my spine). I was warned that they would be excruciating as they went in but to be honest everything was so painful I didn’t really mind. Nadine and Luke said they noticed a difference in how I was coping after the injections which was good! I felt like it alleviated some of the back pressure but not the bum pain.

I was a really upright labourer the whole time and wanted to be standing pushing against a wall throughout all the surges. I think this was because of how Nora was positioned. Nadine said she’d never seen such an upright labourer. I also laboured in the shower a lot and in the bath towards the end. I had a cervical lip which the midwife was able to move the second time she tried and then I was able to push (although it actually felt like I was involuntarily pushing way before that point with sooo much pressure in my bum). I tried pushing in so many different positions including on the birth stool, on the floor on all fours, side lying on the floor but in the end I ended up on the bed in like a clamshell position with Luke holding up one knee and Nadine holding the other. I had a big cheer squad by the end including two lots of midwives as there was a shift change. There was also an obstetrician in the room by the end as Nora’s heart rate was a little unsteady so they were just monitoring that. She was crowning for ages and I was pushing at 300% but her head just wasn’t coming out past a certain point. I probably would have gotten there in the end but there was lots of meconium too by this stage and her heart rate was just a little concerning still so they asked if I wanted an episiotomy and I agreed in the end. She then came out in two more pushes and was perfect! She cried straight away when they put her in my chest and she stayed on my chest for about 2 hours. I was a bit disappointed that I had to have an episiotomy but I’d been pushing for almost 2 hours and was soooo exhausted by then that I think it was the right thing to do. Even though the labour and pushing stage were far more painful than I expected, I felt really supported and the whole day had a wonderful energy. Luke and I found the labour and the first two weeks at home (when Luke was off work) to be the best weeks of our life because of all the love and support and visitors. It was amazing. 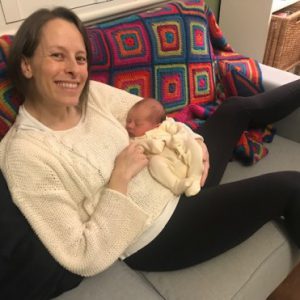 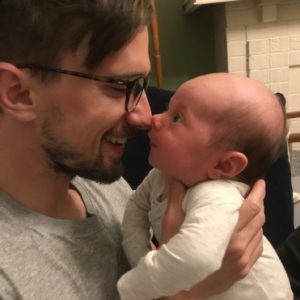 Nora has been an awesome little baby. She’s feeding and sleeping really well so we feel very lucky! Thank you for all the guidance in the course. I had three weeks of mat leave before she came so I used that time to go through the folio and watch some videos. Luke and I also talked through what we wanted and used the example hypno birth preferences as a template for ours.

Thanks for checking in and sorry this email is so long! I wrote half of it in the middle of the night and I think I got a bit carried away haha. I have attached some photos from the last 6 weeks 🙂

Thanks again for everything!

Bridie and Luke and Nora xx