"Even just 6 weeks later I think I’m ready to do it again!"

Our beautiful baby boy Michael was born at 6:50pm on the 22nd Feb after an epic labour with just a few twists and turns! 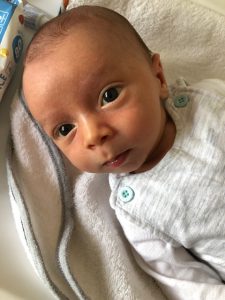 I started having contractions at 2:30am on the 21st Feb. Little Mikey was slightly posterior to the right hand side (sorry I can’t remember the correct terminology!) and instead of making the short turn to the left he needed to adjust, he decided to turn the long way around which resulted in a long pre-labour for me! I stayed at home as long as possible with my tens machine and used the breathing techniques and affirmations I learnt from you. The acupressure points also really helped.

Eventually that night I went in to hospital and by around 6am the next morning I was finally in active labour. I stayed on my tens machine and did accept gas as pain relief as the back labour pains were quite strong, but I was feeling really empowered and ready for action after so many hours in pre-labour.

Around lunchtime I was checked as I felt like I was ready to push. Although I was 8cm dilated my water hadn’t broken and Mikey’s head was still not quite aligned in my cervix. My contractions were also still inconsistent.

By this point I have to admit I had a bit of a meltdown as I was just so tired and disheartened that the labour wasn’t progressing how I had thought it was. I decided to have an epidural which also resulted in having my waters broken and then being put on the syntocin drip to regulate the contractions.

Mikey’s heart rate started to drop and after close to an hour of pushing a doctor was brought in, lights were on, my legs were up in stirrups and a ventouse was used for the final push.

Although the birth ended up taking a turn and resulted in something very different to what I envisaged I have to say the breathing techniques and visualisations I learnt from Hypnobirthing really helped get me through. Especially for those final moments of pushing – as I couldn’t feel anything the visualisation really helped. My midwife said the vacuum hardly did anything in the end it was mostly me!

In the end it all didn’t matter because we have our beautiful little man and I still feel so empowered and amazed at my body and mind that it could do such a thing! Even just 6 weeks later I think I’m ready to do it again!

Thank you again for everything!