"A MASSIVE thank you - everything went as well as I could have hoped for!"

We had our beautiful baby girl Matina on 2 February 2022. A MASSIVE THANK YOU from me and Rob for everything you taught us – we definitely found them very helpful! 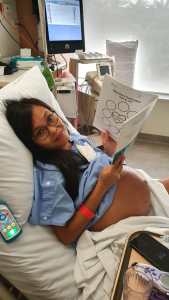 At 38 weeks bub engaged and we started getting ready to give birth at any time. She was measuring big for my size based on the ultrasounds so my obstetrician brought up the option of induction at 39w5d if bub doesn’t come before then. I was hesitant as I preferred least medical intervention as much as possible. Rob and I discussed it, used B.R.A.I.N. and decided that induction at 39w5d would make sense. We didn’t want to risk possibly more interventions if she grew too big for my size

We crossed items on the list of natural ways to start labour as much as possible to avoid induction, but at 39w5d she hadn’t shown signs of coming out soon so off we went to the hospital to be induced.

When we got to our room, Rob set it up so it was dim, turned on the diffuser and played the affirmations track (which was on repeat for the entire labour!). We told our midwives that we’re hypnobirthing and they said they’ve done it a few times so they knew exactly what to do (or not do). We had the toolbox set-up and ready for induction! 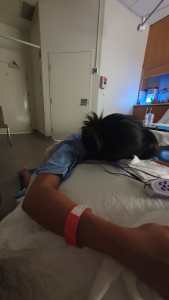 They broke my waters at around 9am. Around 12nn I still hadn’t had contractions so my midwife talked to me about starting an oxytocin drip. Again I was hesitant because our birth preference was less intervention as much as possible. We asked her to explain the benefits vs risks to us and again, after using B.R.A.I.N., we decided to proceed with the lowest level of oxytocin drip. As soon as they started it, the surges came quickly and gosh were they intense!

I used a tens machine to help with the contractions and it worked really well for me. I adjusted the intensity paced along with the surges. I used the breathing techniques and the different positions we learned during class. I was on all fours bending over the birthing ball most of the time, with Rob giving me a soft touch massage. When I needed to give my knees a break I leaned over the bed, leaned on the chair whilst sitting on the birthing ball and slow danced with Rob. At around 4pm, the surges became so intense I asked for the gas. That also worked well for me and after 3 hours, it was time to push.

That part of the labour was the most extreme. I was feeling so much pain that I asked my midwife if she thinks I should get an epidural. She knew our birth preferences as we had discussed it with her beforehand, and she encouraged me that I could do it without the epidural. There were a few times I wanted to give up, in my head I thought they could just cut me open to get it over and done with! I didn’t realise it at the time but I started screaming when I was having surges. The midwife reminded me to focus my energy on pushing instead of screaming. That was a game changer – it was a good reminder to focus on the tools I had, visualising my happy place and listening to the affirmations (which have been playing on repeat for over 7 hours then). 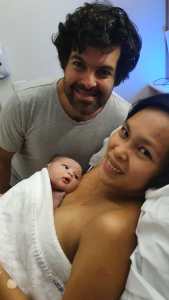 In the end I was very happy with how it all went. I was induced, used gas but didn’t use an epidural and didn’t have tearing. I am very thankful to my obstetrician and midwives – everything went as well as I could have hoped for!

Thanks again Kerry for everything you taught us. I always recommend hypnobirthing as it definitely helped us achieve a positive birthing experience!

P.S. I attached some photos from the big day 🙂 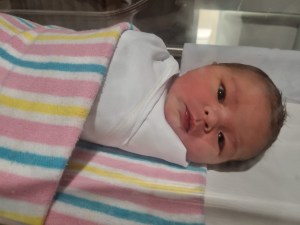