"She arrived on ANZAC Day peacefully at our home"

During the hypnobirthing and childbirth education course, Severin & Nick expressed their desire to explore the idea of a home-birth and after they completed the Hypnobirthing Australia course with me they went away and were able to change their birthing scenario and find a home-birth midwife. Below is the message I received from Sev and Nick, proud new parents to baby girl Maavi….

She arrived on ANZAC Day peacefully at our home with the support of our amazing midwife and doula. She is happy and healthy and has a good set of lungs. So far it’s been a wonderful ride, she is very contented.

I felt so empowered that I could prepare for birth (who know if that was the reason why it went so well). To prepare for birth I did the hypnobirthing meditations very regularly, almost every night (with just a few exceptions), the spinning babies three sisters techniques from fairly early on to make sure bubs was in a good position, I went to chiro appointments towards the end to make sure my hips and pelvis were well aligned, I ate healthy supported with raspberry leaf tea and ate dates towards the end.
The birth went fairly quick for first time mums (so they said)…I had early labour signs starting in the morning, went for breakfast with a friend, went to a chiro appointment at 3pm. Once back home it didn’t take long and it ramped up (around 4:30pm), with quite some throwing up too.

My midwife and doula arrived at 7pm, and I was in the pool around 8:30pm.

On the day to have a quiet, comfortable and “dark” setting with no vaginal exams or other disturbances was so important to me. I wouldn’t have thought that before, but even the midwife putting the Doppler on now and then to check on the baby was a “break” from the normal flow and I realised that, I can’t imagine how it would have been in a hospital with lots of machines ticking next to me or be monitored the whole time. The thought of someone checking my dilation between my contractions is so so foreign and would for sure have changed my progress in that moment. So it is so true what you teach in your course about how important the environment is, I fully understood that during the class and it made sense, but it was so eye opening to really see that working during the birth itself.

At 9:30pm Maavi arrived and circa 70min later the placenta.

I definitely wasn’t the “tranquil birth” like we saw in the video, rather the opposite. It was very primal. Nick is just happy he still has all fingers as I apparently developed some super powers during the “pool party”.

We are so so happy with the choice we have taken and again would like to thank you so much as your course was the ignition to that path. We can just 100% “endorse” a homebirth.
We haven’t ventured too far from the bed yet so the below are the only pics to show her off 🙂

Thanks Sev and Nick 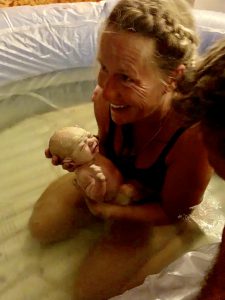 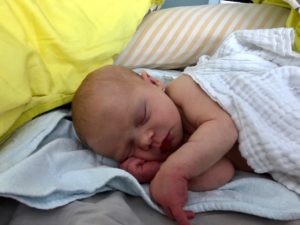