"I am loving telling the story"

The lovely Bec and Nic did the hypnobirthing course with me via zoom in preparation for the birth of their baby boy. Here they tell us the awesome story of how they didn’t realise initially that labour had started and they JUST made it to hospital minutes before their son was welcomed into the world!!!

I thought it would be good to update you all that we had a bit of a surprise on Fri 27 Aug, ending with the birth of this amazing guy, Kip!

I am loving telling the story!!

My estimated due date was Fri 3 Sept, and the week he was born I could feel that he was still right up in my ribs, so I didn’t think he was going to be arriving before that. At my 38 week appointment they said he was engaged but still high up. On the Thursday night (was 39 weeks on Friday 27), I couldn’t sleep at all, and had a lot of pressure in my pelvis – for some reason I got it in my head that all the sensations were of him dropping. And I thought quite a few times throughout the night, I don’t want to be a baby about this, but I’d say that these sensations are more than ‘uncomfortable’! I definitely wondered how I was going to cope if I was going to have those intense feelings for a couple of weeks awaiting his arrival! 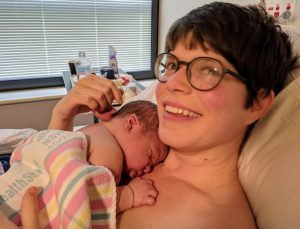 In retrospect, it was early labour! And of course all the signs were actually there – lost my mucus plug at some point, and was having surges, but I had trouble in my exhaustion to identify it as such! At about 5:30am I started to wonder if it was labour. By then I felt pretty nauseous, but put it down to being tired. At about 7am I went and had a shower and told Nick what had been happening overnight. Of course he was like, that sounds like labour! But we were both very conscious of all the stories of long labours, labours that come and go, etc, so kept our expectations low. Nick timed a few surges just to see where we were at. Something I had not expected was that they weren’t super obvious to me – the cramp-type feeling I was getting was not completely subsiding at any point, so I found it hard to identify the ‘beginning’ and ‘end’ of each surge. But at that point they were about 5 mins apart and the most intense feelings lasted 1 min or so. Nick called the Birth Centre, and like us, they were very calm and just said, keep doing what you’re doing, don’t worry about timing them, just pay attention to when Bec can’t speak during them. Again, in retrospect, I was nearly at that point already so that should have been a bit of a sign!!
I was meant to have personal training at 12pm that day, and my second Pfizer shot in the morning. I texted my trainer to say I wasn’t feeling well and didn’t think I’d be up to training and would check in with him Saturday, and asked Nick to call the Drs and postpone my vax – naively, I said to ask if they had appointments in the afternoon ‘in case I feel better’ – luckily they didn’t! Again, the fact that I needed Nick to make that call should have been a sign! 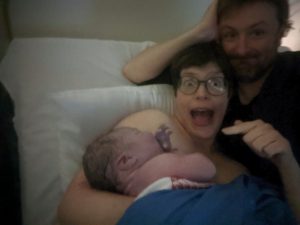 For most of the morning I found lying on my side and breathing through the most effective technique. I was a little too conscious of all the stories of exhausting yourself early in labour, so I was taking it as easy as I could, and trying not to escalate my coping strategies too early! I was pretty in my own zone from early on – Nick was counting for me and doing light touch massage, which did help but I think after a certain point I was tuning everything out. 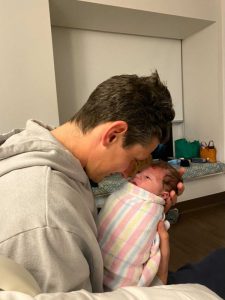 By mid morning, I felt like I wasn’t getting much of a break. Because I was struggling to tell the beginning and end, I told myself it meant they were irregular and therefore I still had a long time to go! We had a group chat going with our student midwife, and she suggested a shower – that was a godsend. After the shower, I think all I did was lean against the bed/bench/table and moan loudly. Vocalisation really helped me – small tip though, take some throat lozenges with you to hospital in case you end up staying in – my throat was really sore after!

At some point I started to feel overwhelmed so went to get back in the shower. As soon as I went to step in, I felt pressure in my butt so got out and called out to Nick. I went to sit on the toilet because I’d remembered reading that was helpful, though at the back of my mind I did realise that meant he was on his way! Nick was already on the phone to the birth centre, and they spoke to me for about 10 seconds before telling Nick we should come in. Nick came in and told me my brother would come pick us up in 20 mins, and I remember thinking that 20 mins was way too long and I wanted to be at the birth centre right then. However, it did take 20 mins to get me up and get our things together. I don’t particularly remember, but I know I had surges on the way out and again at the car (we live above a cafe so apparently I provided some interesting entertainment for the people waiting for their coffees…). I was adamant that I was not getting in the car until I’d had the next surge. Luckily, in the car I got a bit of a break and only had two surges, right when we were close to the hospital (also luckily, we live a five min drive away). My brother dropped us at the entrance and Nick did the COVID check in while I had another surge outside.
We walked straight in and the birth centre had the room set up and the bath run. I basically made a beeline for the bath because by then I could feel his head, but was unable to tell anyone! I jumped in and hoped that they knew his head was there. First surge in the bath and his head was born, and second surge the rest of him came out! Everyone was absolutely in shock and no-one was ready for it! 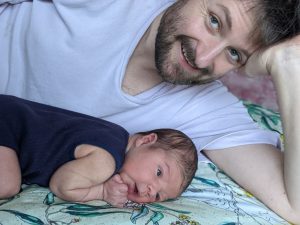 We were able to do skin-to-skin, delayed cord clamping and physiological third stage. Unfortunately though due to the quick exit and his size (4.26kg!) I had a third degree tear that meant I had to go to theatre. I was really glad that the birth centre was able to follow our plan, and that Nick was familiar with it too – they helped me express before I went so Nick could feed him, and Nick checked with me multiple times that I didn’t want to ask them to wait until after the first breastfeed. I said to Nick once we were home that they could have suggested anything to me at that point and I would have agreed, so the plan was very important. However, I did really want to go ASAP so I could be back again ASAP.
Nick and Kip hung out with the midwives while I went and had the best nap I’d had in months! 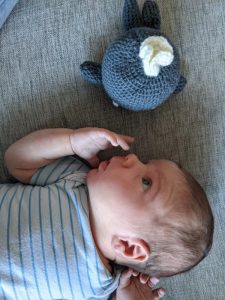 Was wonderful to be reunited again after, and then get to breastfeed! We spent Fri – Monday afternoon in hospital, which had its ups and downs. I was mostly desperate to get home, but also the support we had while there was fantastic. The midwives were amazing and we got help with things like bathing, feeding and swaddling which was reassuring and helped us be confident in going home. 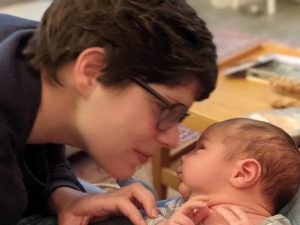 The next week was pure bliss! We were on an extreme high and completely in love. The ‘three day blues’ hit me a bit later (about day 7), and was actually precipitated by a midwife visit that sowed doubt about breastfeeding because Kip hadn’t put on the weight they would have liked. However, I have a great online support network of friends who were invaluable in reassurance and encouragement. I highly recommend connecting with anyone and everyone you know (and trust!) who has been through it before. By the next home visit, Kip was back to his birth weight (and then some!) so that put me at ease, and the midwives were helpful and reassuring as well.

Since then we’ve been enjoying our little bubble. Restrictions have had their upsides! His grandparents, who all live in Vic, are desperate to meet him though, so looking forward to borders opening at some point. 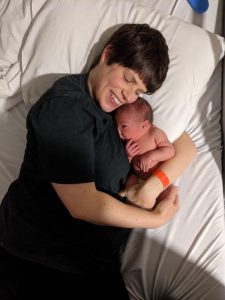 So as promised, the TL;DR is: an impatient baby decided to arrive ‘early’ and with great haste. Coupled with our commitment to stay chill – and stay home as long as possible – this resulted in us checking in to the hospital at 1:30pm and his birth time being exactly 1:35pm! Luckily had a ride to the hospital because if Nick had gone to park he would’ve missed the birth…

Bec (and Nick and Kip)