"Even though it didn’t go to our original plan, it was perfect in every way! "

We were pretty happy with the birth experience, we were mentally prepared for it thanks to you, even though it didn’t quite go to plan.

As I mentioned to you, I was being induced at 41 weeks. I had tried all the tips and tricks to naturally induce labour for the weeks leading up to that point but he just wasn’t keen to get out of his cosy place in there. We also had a doula, and due to COVID-19 she was unable to join us at the birth, so had planned to spend as much time at home as we could, but due to the induction, that also didn’t happen.

I first had the gel in the early afternoon of Wednesday 3 June with not much happening after that, so again at 6pm that evening. Around 10pm I felt a pop and a drop (is the best way I can describe it), which I was happy that something happened without further intervention…yay! Things were slow with not a lot of progress overnight, I was using the breathing techniques, affirmations and gentle massage from Jesse to get through the contractions to that point, and in the morning after discussions with the midwives and doctors we made a well informed decision to move forward with the syntocinon drip.

Things then started to progress much quicker, however unfortunately as I was on the drip, I was unable to use the bath at that point, which was a little disappointing as I had hoped to spend some time in there, and perhaps even deliver there. I spent some time on the exercise ball and wandering around, but I felt most comfortable lying down and focusing on my breathing and as the surges became more intense, Jesse pushing into the points in my lower back was really comforting. 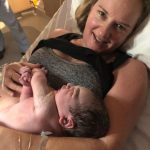 I think it was around 1pm when, in hindsight, I was in the transition phase, as I just burst into tears and felt like I couldn’t go on anymore. The doctor examined me at this point, and I had gone from 2cm dilated to 8cm in a very short amount of time and it was now time to bear down and bring my baby boy out into the world! As physically exhausting as it was, I found this part the most easy and enjoyable and before I knew it, at 3:50pm I was holding my little baby in my arms. Jesse was able to pull him out at the very end, so I was really thrilled he was able to get involved in that way. 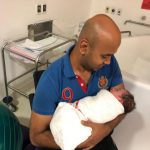 The midwives and other medical staff were amazing and all really surprised I was able to have a vaginal birth so easily and not end up going for c-section. Without the breathing techniques and focus I was taught with Hynpobirthing, I think it might have been a different outcome, so I am grateful to you and the program for that. We delayed cord clamping and spent a blissful hour just the 3 of us in our little bubble of love enjoying our new little bundle before joining the rest of the world once again.

So I wanted to thank you for your ongoing support and advice and for teaching the program, it was the best investment we made. And even though it didn’t go to our original plan, it was perfect in every way 🙂 I will definitely be recommending people to Hypnobirthing, and to you Kerry, for those in Sydney, you’re an amazing teacher of the program. 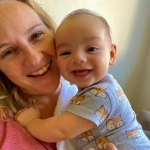 Lots of love to you and your family.