"She came into the world as a vaginal breech baby....I know hypnobirthing helped a lot to deliver in such a calm way given our special circumstances."

Hi Kerry, it’s Monica and Dave from your hypnobirthing course in January. We wanted to reach out as our baby girl Poppy has arrived!

She came into the world as a vaginal breech baby, with her bum first and 15 days early at 8.58am on 22 April. She is on the smaller end weighing 2.525g and measuring 50cm long.

Poppy is perfect, has settled beautifully and we are in love! 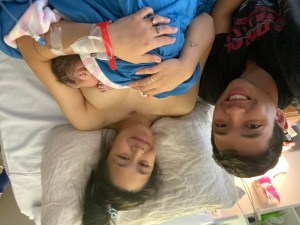 It was a bit of a wild ride, we found out she was Frank breech at her 36wk scan which was surprising as we thought she was cephalic the whole pregnancy!

Thanks to our amazing doula Amanda, we got in touch with another doctor at a neighbouring hospital who is known to be supportive of vaginal breech deliveries. Straight away, we booked appointments with an acupuncturist and chiropractor to try to spin her naturally, listened to relaxation hypnosis tracks, and did moxa sticks each night. We booked an ECV the next week which was unsuccessful, so we committed to trying a vaginal delivery.

The day after our ECV, my water broke 6.30am after Dave had left for work (I didn’t even realise it was my water!) and I ended up going to the hospital at 4pm for a checkup after speaking to a midwife. After they confirmed it was amniotic fluid, they let me leave the hospital to labour at home as we seemed very “calm and sensible”. When I got home, I set up relaxing music, dimmed the lights, and diffused my favourite scents.

Dave came home at 7.30pm and my contractions became more consistent, so we ate dinner and Dave took a nap until about midnight, when I woke him up due to the intensity of my contractions. We called Amanda, who came and laboured with us. We then put the TENS machine on and left home for the hospital at 2.30am.

Throughout the labour, we used our hypnobirthing breathing techniques, acupressure, and a TENS machine for pain relief. Imagining the contractions as waves also really helped! I was fully dilated at 7am, she took an hour to descend fully, and I was pushing for about an hour. She needed help breathing for the first few minutes and I ended up needing synthetic oxytocin as I had a big haemorrhage when trying to deliver my placenta without help.

Thank you for the amazing hypnobirthing content you delivered that weekend. The content delved into physiological birth and emphasised the importance of breath, informed consent, and the role of the birth partner, and I know that it helped a lot to deliver in such a calm way given our special circumstances.

We are so grateful!

"She came into the world as a vaginal breech baby....I know hypnobirthing helped a lot to deliver in such a calm way given our special circumstances."

"Thank you so much for everything you taught us in the hypnobirthing class, we had the most incredibly positive experience welcoming our little boy!"

"Your course definitely helped prepare my husband and I to take on the wild and empowering journey of labour and birth..."

"Her birth was everything I had dreamed of. This time going into birth preparing for a VBAC I felt so much more prepared."

"A MASSIVE thank you - everything went as well as I could have hoped for!"

"It was an incredible crazy experience!"

"Your course really helped me deal with all the information that was thrown at me."

"It was such a special experience!"