"We felt so prepared and educated before I went into labour"

Sit back and enjoy this positive birth story – welcome to the world Archie Rocket!!! 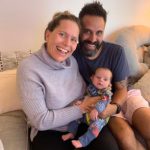 The initial reason we reached out to you was through a recommendation. Mark was dealing with a lot of anxiety around Archie’s birth and our friend mentioned that hypnobirthing could really help. The antenatal classes at hospital filled him with dread resulting in panic attacks and at one stage having to leave the class. The clinical, practical nature of them work for some people but not for Mark, and it wasn’t until we started hypnobirthing classes did I realise how little I really knew about what my birth could look like and how much control I could have over it. The classes really opened my eyes to how incredible the female body is and what we’re capable of. Antenatal classes were very clinical and practical and skirted around the most exciting and wonderful aspects of giving birth.

Before our hypnobirthing journey my idea of birth was … panic, waters break, rush to hospital, park the car, smash some gas, maybe some morphine, ask for the epidural, give birth, get stitched up, feel nothing!

Hypnobirthing was a very enlightening experience for both myself and Mark! 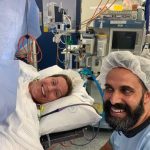 I went into labour Saturday morning around 2.00am, I couldn’t tell if my waters had broken so the hospital asked me to go in at 7.00am to check due to the 24 hours before infection becomes a concern. After a few tests they confirmed they had started to leak so ideally they wanted me back within 24 hours. My contractions were mild, and I went home as I wanted to labour there as long as possible. The head OB on duty wondered why I didn’t want to stay in hospital as I was in labour, at this point I was 1 cm dilated. Through hypnobirthing we had learnt that the best place to be when labouring is a place where you feel safe, secure and calm. It can help to establish contractions through the stable release of hormones especially oxytocin. Once we started to move around, trips to hospital etc I noticed my contractions subsided.

By 11.00pm we were putting everything I had learnt into action, aromatherapy, breathing, music, visualisations, meditations etc. Mark was amazing and administered acupressure during every contraction. Just after 11.00pm my waters properly broke, this became apparent as I watched bucket loads of water hit our new wooden floor. I checked the colour of the fluid and I could see there was some meconium in there, so we were concerned that Archie might have been in distress. He was actually already 10 days late so it could also have been that he just needed to do a long awaited poo.. but we didn’t want to risk it so we went to the hospital.

When we got into the birthing suite we gave our birth preferences to the midwife who was lovely and really open to reading and walking through them with us. Once in the room they checked my progress and I was still only 1cm dilated. Things weren’t moving along. After getting settled the OB came in and explained his plan. He wanted to put me on an epidural so I could sleep, I’d been awake 24 hours since going into labour and he felt I needed to conserve energy. 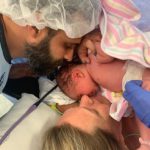 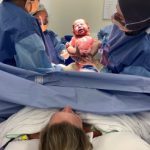 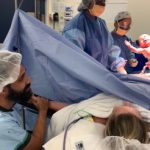 I’m also epileptic and he was concerned that if I didn’t sleep I was at risk of a fit, which is completely understandable. I’ve been an epileptic for 25 years and on medication and felt 100% confident in my ability to give birth with a very small risk of having a fit. I understand that everything he was suggesting was in my best interests but at that stage it wasn’t what I wanted. I said I wanted to labour as long as possible without an epidural because I wanted to feel what it was like to give birth.

At this point I asked him if he had ready my birth preferences which was geared towards a natural birth? He apologised and said he hadn’t, once he had he understood my approach.

Following all this I was hooked up to the baby heart rate monitor, after an hour or so Archie’s heart rate was bouncing up and down and the doctor recommended establishing my contractions / speeding them up, using syntocin. It was worrying and I had no idea if these were false positives and wasn’t willing to take a chance. They administered the syntocin and I laboured for another 6 hours with no pain relief. The acupressure, oils and music helped a lot. I also found that vocals when breathing gave me some real focus and relief. This wasn’t something I had expected, I thought the crazy noises women made when giving birth was due to the pain, but actually it is really soothing!

After the 6 hours Archie’s heart rate dropped again and the OB said that if it didn’t begin to stabilise they would take me to theatre. I asked if there was anything else they could try, I wasn’t ready for a c-section and felt that we hadn’t exhausted all options. So he ran a bag of saline through me and Archie’s heart rate stabilised. Constantly through this process I was referring to the BRAIN acronym.

After another hour I still wasn’t dilating, labouring on the syntocin was exhausting. They wanted to increase the dose further, they suggested it was probably time for an epidural and I agreed. After another 5 or so hours on the epidural they then came and checked progress. I was only 2.5cm dilated, FFS! God he did not want to come out! At this point they started to float the idea of a ‘plan b’ c-section. The OB was still unhappy with the baby’s fluctuating heart rate and I wasn’t dilating. Again, I asked if there was anything else they could do to buy some time so he suggested he do a stress test to see how the baby was coping. This involved scratching the baby’s head and testing for stress hormones. However, when he went to find the babys head it was still at -3, this was actually comical, they couldn’t reach his head do a stress test.

After another couple of hours the new OB came on duty. He said that I still wasn’t dilating and my cervix had begun to harden and that really the only option now was a c-section. I went into this completely open minded but was tired and emotional. Mark, Amanda our doula and the midwives were amazing and really helped me through this moment. I felt that I had been in complete control of my birthing experience and done/tried everything possible for a natural birth which made me feel empowered and comfortable with my decisions.

Prior to going into theatre we had asked the surgeons to take a look at our caesarean birth preferences, we actually never thought we would need them. The surgeons were a bit hesitant, they said ‘isn’t the goal to get the baby out?’ However, once they read them they were totally on board and incredible. Some of the things we requested included a delayed cord clamp, skin on skin after he was pulled out etc. The anaesthetist was a total legend and took heaps of photos and videos for us of every step of the birth. Meanwhile I wasn’t quite expecting the effect of the drugs / spinal block and it was at this point I used all my hypnobirthing visualisations which calmed me down and I felt way less panicky, they really helped me through it.

After a few minutes of rummaging around we heard a little bleet, it sounded like they were pulling out a goat, then we heard the scream and saw our beautiful son Archie Rocket Clayton Smee. The most mind-blowing experience of our lives… after burning man…joking! 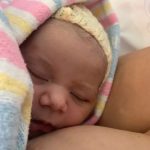 Through the 40 hours it took to bring Archie into the world, the midwifes (who managed to get Mark into the theatre), doctors, anaesthetist, the surgeons at Randwick women’s were amazing and such a huge support.

I can’t rate Kerry’s hypnobirthing class enough. Firstly, anyone who suffers from generalised anxiety or anxiety around the birth itself Kerry’s course is incredible. Her kind and intelligent approach to her classes removed a-lot of the unknowns for us and also brought back the feeling of excitement, wonder and joy that should be part of the birthing journey. We felt so prepared and educated before I went into labour. I had a whole ‘toolbox’ to help me relax, breathe, visualise to get the most positive outcome for my birth. I was able to weigh in on most of the decisions that were made which made me feel I was in control throughout, regardless of the interventions that happened. 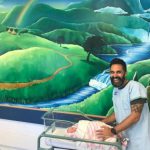 It was an incredible experience and I’d do it all again!